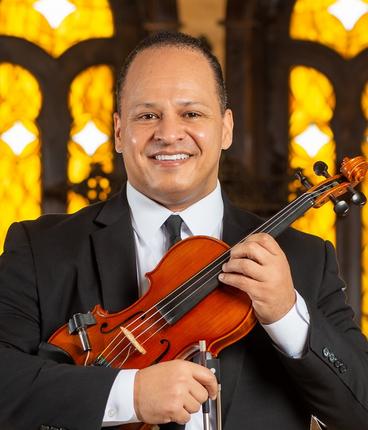 ​​Originally from El Paso, Texas, Dean began studying the violin at the age of 12 with violinist Fred Jewel.  At 15, he began studying with Guillermo Quezada, principal violist of the El Paso Symphony.  He received a scholarship to attend Baylor University and while in Waco, Tx he performed for three years with the Waco and San Angelo Symphonies.

His solo violin service began in 1992 in New York City through the placement bureau at The Juilliard School where he completed his B.M. degree in performance.

Upon moving to Dallas, Texas in 2001, Dean has performed with the Shreveport Symphony Orchestra, the Allen Symphony, the Orchestra of the Pines, the Lubbock Symphony Orchestra, the Las Colinas Symphony Orchestra, and the Wichita Falls Symphony Orchestra.  He performs continuously as a freelance event soloist for wedding ceremonies, dinners, and corporate events.  Past corporate clients include The Chase Tower, Neiman Marcus, Ethan Allen, Anne Fontaine, Softtek, The Adolphus, Direct Selling News, Omni Hotels and Resorts, The Thanksgiving Tower, Lincoln Plaza, Ebby Halliday, Frost Bank, Offices of the Rolling Stones, the Dallas Athletic Club, The Rosewood Mansion and The Water Club in New York City.

Dean has professionally recorded, performed, and toured with a diverse variety of stage acts performing venues in London, New York (CBGB's) and Texas.  He has performed in music festivals such as the City Stages Jazz Music Festival in Birmingham, Alabama, and the Scarborough Fair and Texas Renaissance Festivals.  Dean has performed the fiddle role in the theatrical production of Mark Twain's "A Murder, A Mystery, and A Marriage" produced by Rover Dramawerks in Plano, Texas and also as a featured soloist in the 'Three Kings' and 'Women's Joy' event productions by Milestone Church in Keller, Texas.  In 2011, he performed fiddle in a Hank Williams musical 'No Sad Songs' produced by Texas Family Musicals.  Another fiddle role in a theatrical performance Dean performed in was the Garland Civic Theater's production of "Hank Williams: Lost Highway".​